The Small Brown Scorpion of Gauteng

In the warmer months of summer, when the rains arrive, there is a small brown scorpion in Gauteng which starts moving and often enters houses. This little scorpion is called the Plain Pygmy-Thicktail (Pseudolychus ochraceus).

It is a small scorpion (around 3 cm in length) and is usually pale brown or reddish-brown to grey in colour. It usually has a light-coloured tail tip (telson) and light legs. The hands/pincers are generally dark with light fingers. The body is plain brown, often with dark bars across the segments. 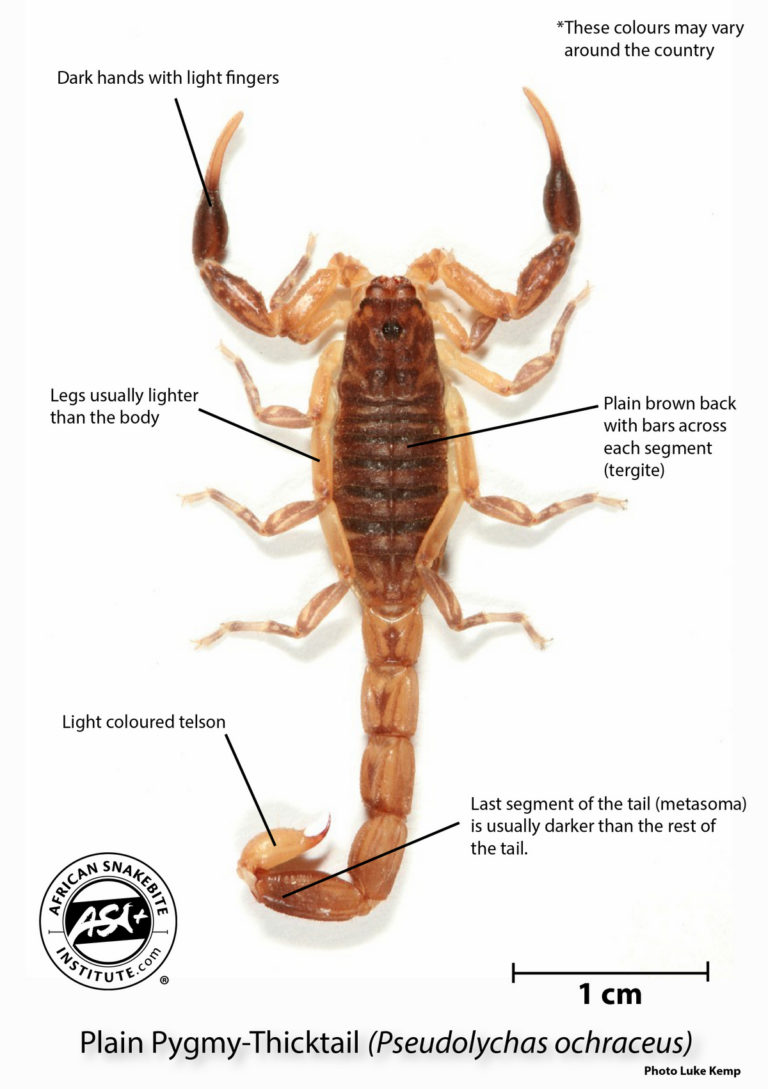 Because of its size, it is often incorrectly assumed to be a baby scorpion and people worry that there may be more “babies” or adults around. An interesting thing about this species is that in Gauteng, south of the Magaliesburg, it is an all-female population with no males present. Outside of Gauteng, males are present. It seems as though the Gauteng population reproduce by parthenogenesis (the act of asexual reproduction – no fertilisation by males – where the offspring are genetically identical to the mother)
It favours damp areas and seeks shelter under surface debris like leaf litter, or pot plants, brick piles, logs and rocks. The Plain Pygmy-Thicktail often enter houses and people find them crawling around or stuck in the bath or sink.
The Plain Pygmy-Thicktail is the most commonly encountered scorpion in Gauteng and Bloemfontein. They occur in the Free State, Gauteng, Mpumalanga, Limpopo and North-west provinces. 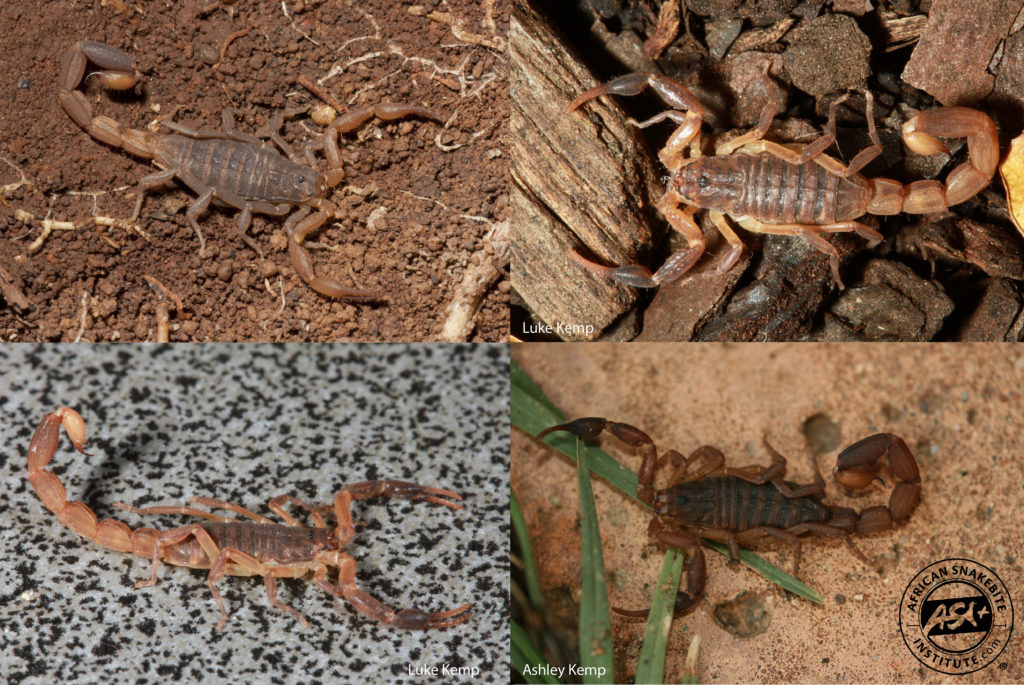 This inoffensive scorpion very rarely stings people, unless it is trodden on. The sting is painful and about equal to a Bee sting. The venom is not dangerous to people or pets and not medically significant. On a side note, there are no medically important scorpions in Gauteng and although scorpions are all venomous, a sting from any of the local scorpion species will only result in a burning sensation for a couple of hours and maybe some pins-and-needles or numbness for a day or two. More venomous species, such as the Thick-tailed scorpions of the genus Parabuthus,  may end up in Gauteng as they are transported  with firewood or other goods such as camping camping gear so always be very careful should you encounter a scorpion. 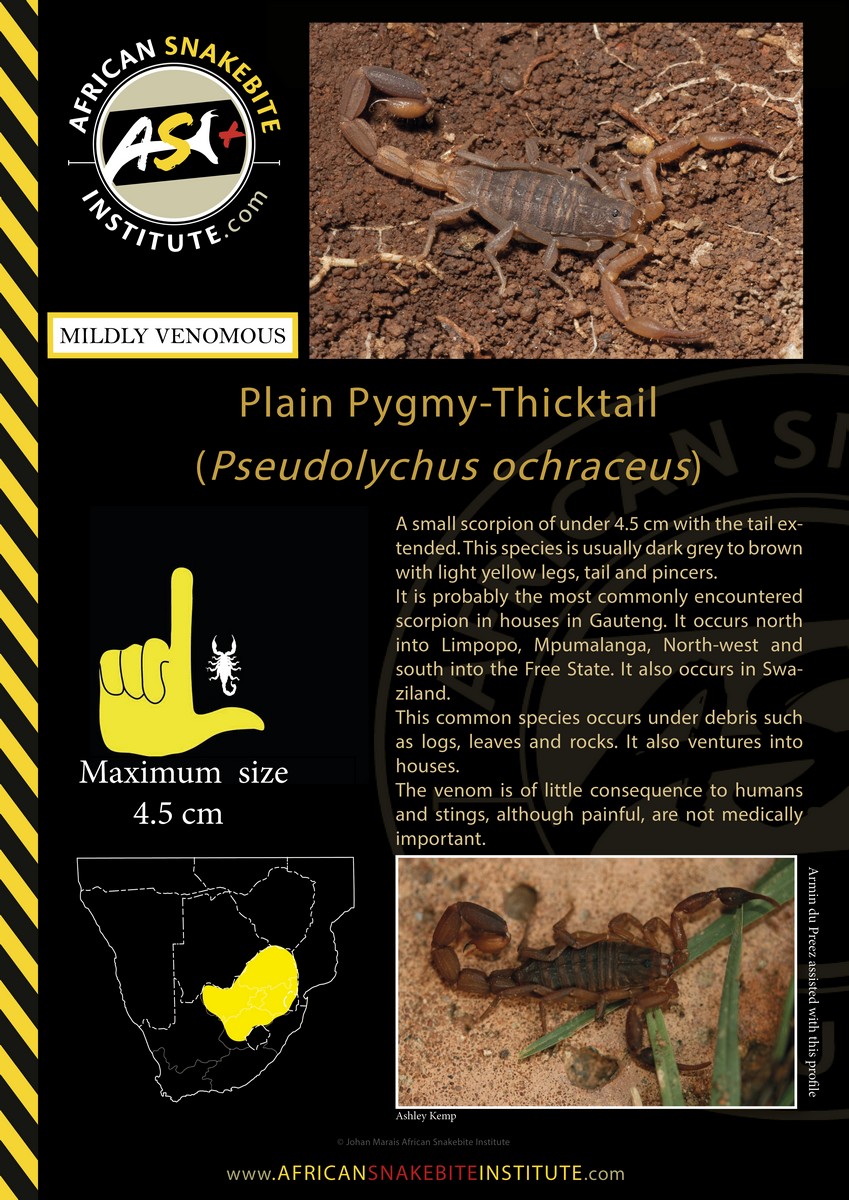 If you do come across a Plain Pygmy-Thicktail in your house, you can simply brush it into a dustpan and gently release it in the garden or a vacant plot or piece of land nearby. No need to crush it or spray it with insecticides.