There are nine snakes in southern Africa that may be green in colour. These snakes can be complicated to tell apart and many people struggle to do so. Only two of these snakes are highly venomous, namely the Green Mamba and the Boomslang. The Many-spotted Reed Snake is considered mildly venomous, however, bites to humans are not of medical significance. The other six snakes are the harmless Green Snakes in the genus Philothamnus, commonly called Bush Snakes, Green Snakes and the Green Water Snake. These snakes are often killed needlessly as people confuse them with the Green Mamba or Boomslang. The harmless green snakes can be tricky to tell apart, but with the use of distribution maps and some morphological features (scale counts and colour) they can be identified.

The figure below will help you understand some of the references to head scalation discussed in each species account. 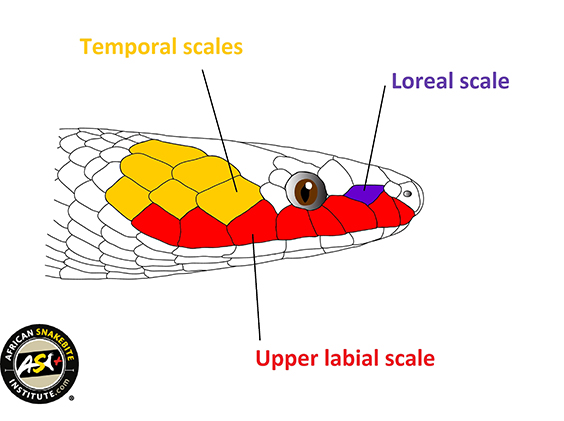 The Green Mamba is a large snake that can reach up to 2.5 m in length. They possess a potent venom that is both neurotoxic and cytotoxic and bites often result in swelling. Polyvalent antivenom is effective against the venom of this species. In South Africa they are restricted to within 20 km of the sea in northern Zululand but around Durban and the KZN south coast no more than about 4 km from the sea, where they live in dense coastal forest. Further north in Africa they go further inland and reach the forests on the eastern side of Zimbabwe. They can be identified by the elongated coffin-shaped head and large size. The belly is a pale green or yellowish green and there may be the odd yellow scale on the body. These snakes are shy and live in trees (arboreal), seldom venturing to the ground. On the head profile you can see that this species lacks a loreal scale, separating it from snakes of the genus Philothamnus. 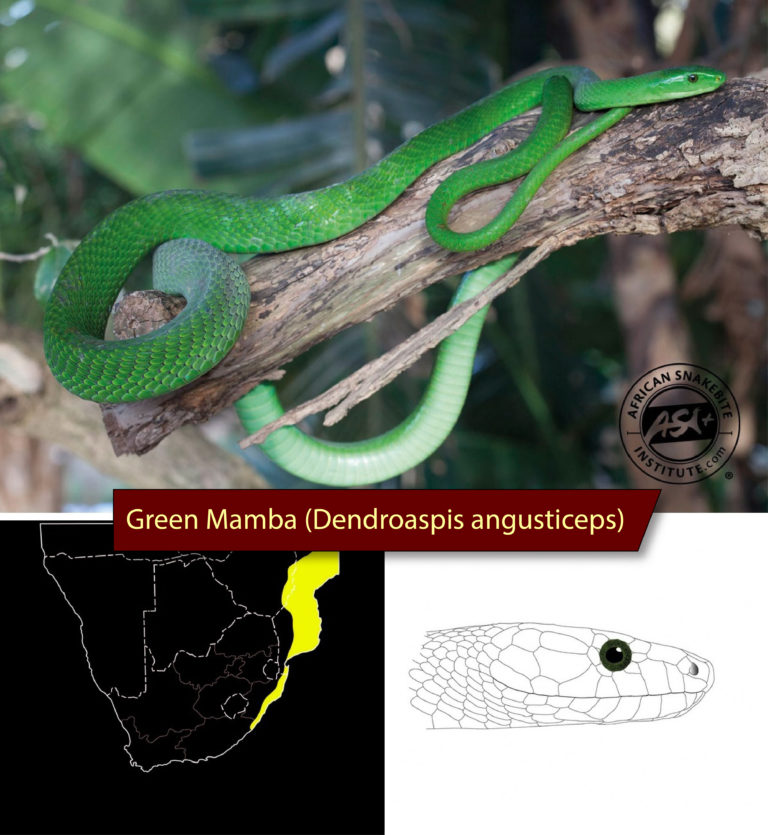 The Boomslang is a large snake that can reach lengths of around 2.3 m. They have a potently haemotoxic venom and a bite requires medical attention. Fortunately it is an extremely docile snake that rarely bites unless caught or stood on. There is an effective monovalent antivenom available for a bite from a Boomslang. In Southern Africa they are widely distributed avoiding the dry treeless areas of the west. These snakes are arboreal, but will go to the ground to bask or catch prey. The Boomslang can be identified by the short stubby snout and large eye. In juveniles (under a meter) the eye is a bright emerald colour, going olive green as they age while the overall body colour is grey and not green. Males are generally green, or black with yellow or greenish sides in the Western and most of the Eastern Cape. Females are usually olive brown, but occasionally green females have been found. The scales are heavily keeled creating a unique scale pattern amongst green snakes. The loreal scale is present in this species, separating it from the Green Mamba. Juvenile Boomslang are usually light grey to brown above with stippling of blue, the throat is yellow to orange, making it unique in colour and very different to the Philothamnus. Any snake under 80 cm that is green is very unlikely to be a Boomslang. 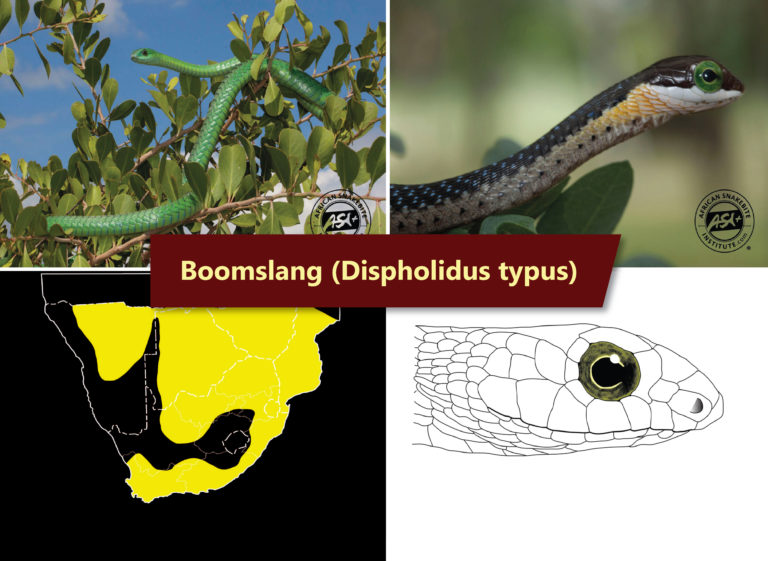 The Many-spotted Reed Snake (Amplorhinus multimaculatus) deserves a mention in this group as there are green individuals. This snake, although common, is relatively secretive and occupies damp and marshy areas. The Many-spotted Reed Snake occurs in two colour forms; green and brown/patterned.  It is a short stocky snake that reaches about 60cm in length. It occurs along the Eastern escarpment from around Cape Town to the Zimbabwe Eastern Highlands. It poses a mild venom that may cause local swelling, but is not of medical significance. These slow-moving snakes can be identified by the stocky appearance with brown or green and faint pale speckling. The head is blunt and similar to a Slug-eater (Duberria sp.) or Spotted Skaapsteker (Psammophylax rhombeatus) in profile. 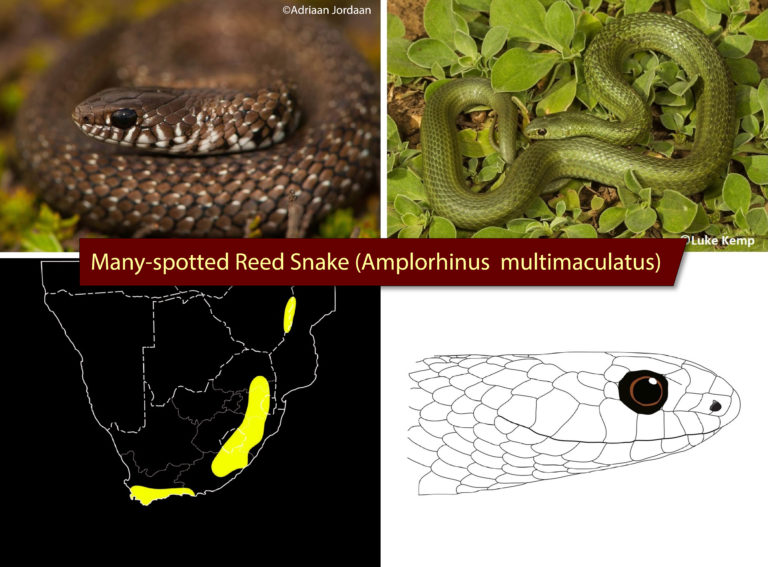 The Ornate Green Snake is a slender green snake reaching about 80 cm in length. In Southern Africa, it is restricted to the Caprivi strip and central Zimbabwe. It is easily recognised, having a vertebral stripe of reddish-brown from the start of the head to the tip of the tail. This species is usually associated with water bodies and lives in reeds and flooded grass, but can be found in open grasslands. It is harmless and hunts amphibians in the reeds. Distribution and colouring make this species relatively simple to identify. 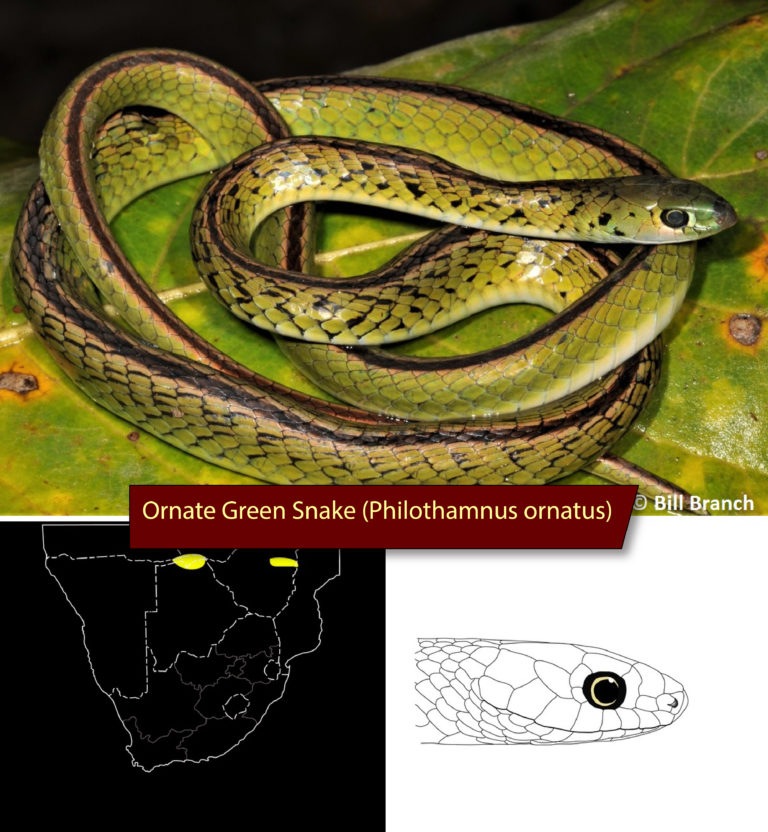 The Angolan Green Snake is a thick-set green snake that is seldom seen in South Africa, but common from Zimbabwe and further north. The lower jaw is usually a white/pale colour and the head is robust. When the Angolan Green Snake is agitated, it puffs out the skin on the neck showing yellow speckling. The eye is usually bright yellow with a round pupil. In South Africa, there are records from Northern Zululand, but no recent records have surfaced from this area. Aside from distribution, the Angolan Green Snake has three upper labials making contact with the eye and a single temporal scale, distinguishing it from the Green Water Snake that only has two upper labials making contact with the eye. Colouration excludes the Ornate Green Snake and distribution excludes the Western Natal Green Snake. The Spotted Bush Snake and Eastern Natal Green Snake both have paired temporal scales. 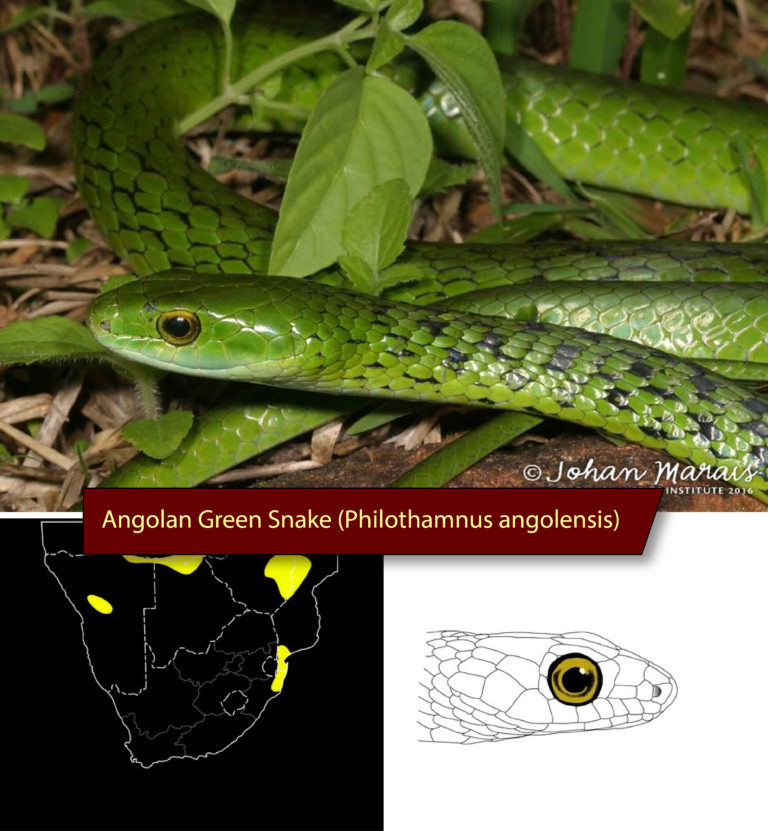 The Green Water Snake is a common species in the eastern half of South Africa and further north in Africa. It reaches a maximum length of around a meter, but averages about 50cm. It is not as thin as the Natal Green Snakes and has a more rounded head and a slightly shorter tail. The eye has a lot of yellow, and the lower jaw is pale white. The snout is often yellow on this species and occasionally there may be black spots up the neck (those that occur further north). Both species of Natal Green Snake have keeled ventral scales, helping them grip in trees, while the Green Water Snake does not have these keeled belly scales. Compared to the Angolan Green Snake, the Green Water Snake only has two upper labials making contact with the eye. 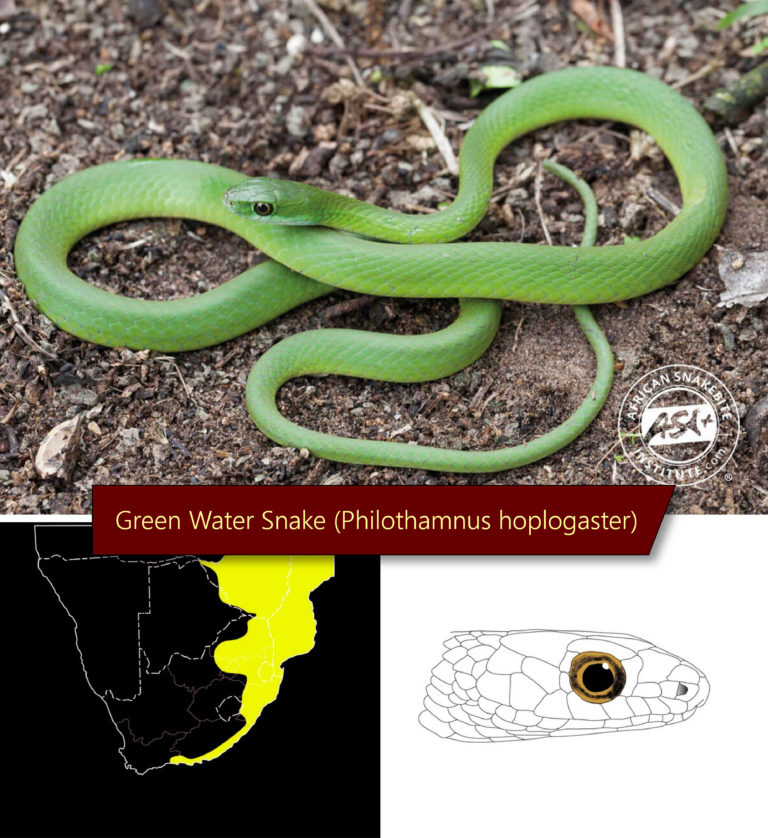 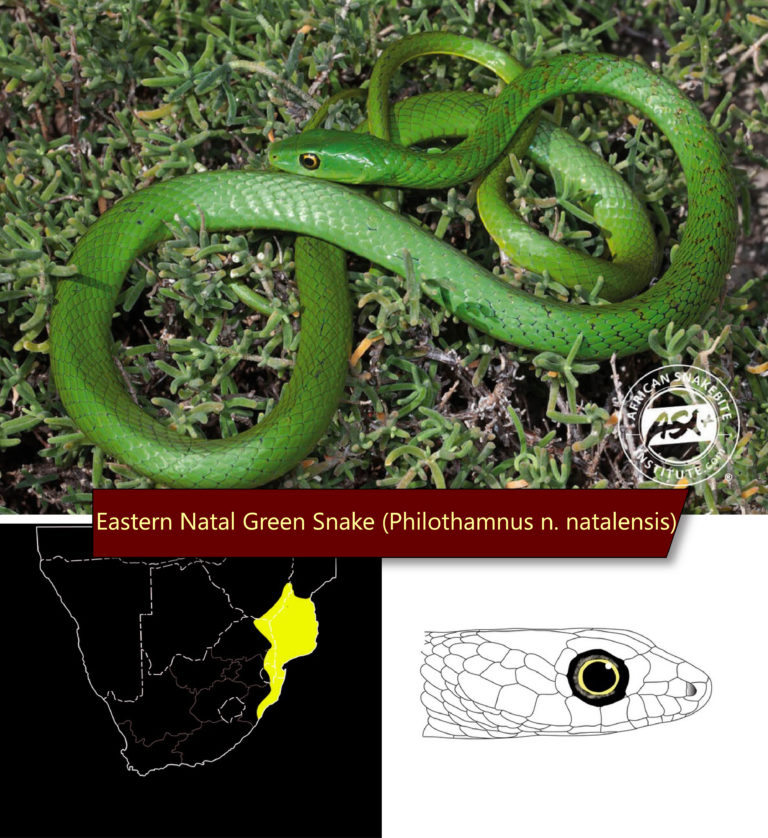 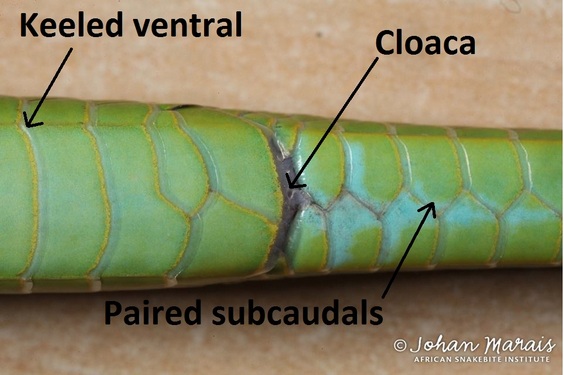 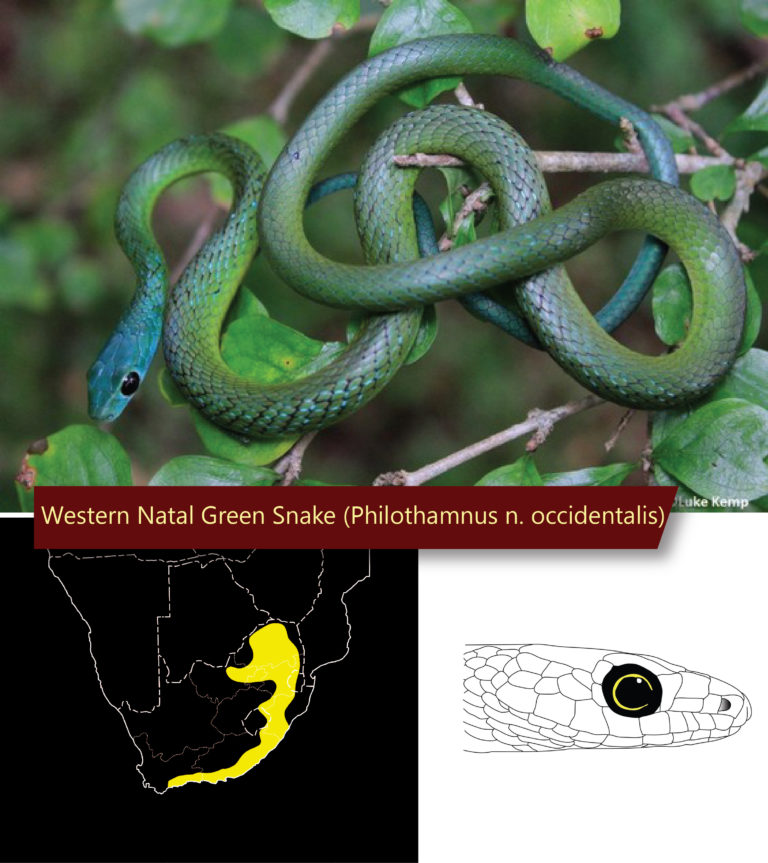 The Spotted Bush Snake is the widest ranging Philothamnus in Southern Africa and probably the most commonly encountered. It is relatively easy to identify, having spots on the first half of the body and a prominent yellow to red iris. These long thin snakes average around 60-80cm, but can exceed a meter in length. In KZN and the Eastern Cape, they are a bright green with dark spots, mainly on the front half of the snake. In the north they are often green going into a coppery brown towards the tail, again with dark spots mainly on the front half of the snake. Specimens around Springbok in the Northern Cape can have bright yellow and turquoise on the head with dark spots. In the western regions of the Eastern Cape, they can often lack spots and are a light green with a pale chin. These slender snakes are harmless, but bite freely if handled. They hunt geckos and lizards and are often found in and around houses. 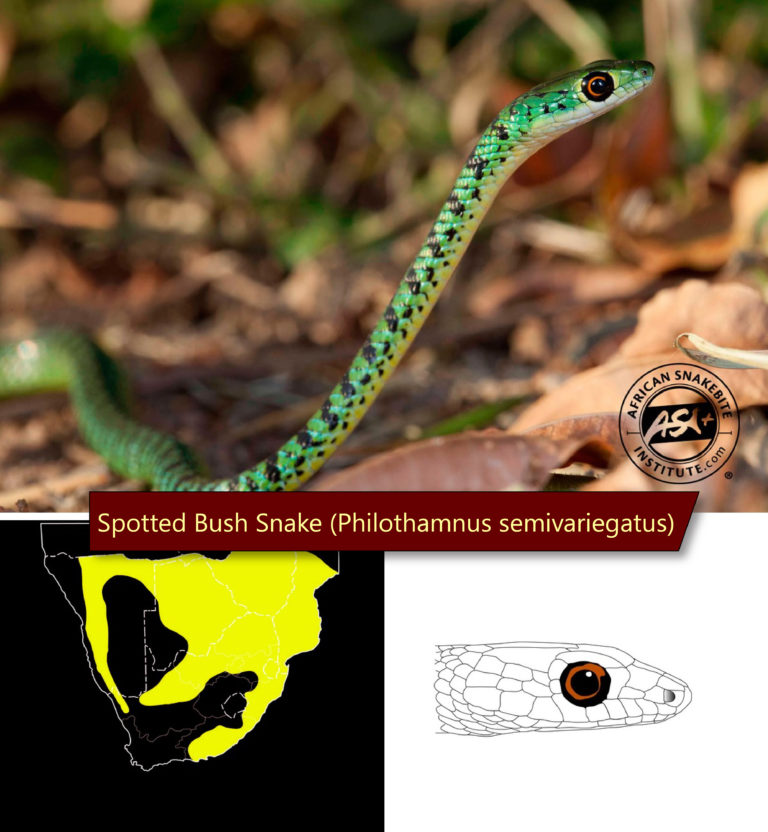 Chart of the head scales of the Philothamnus 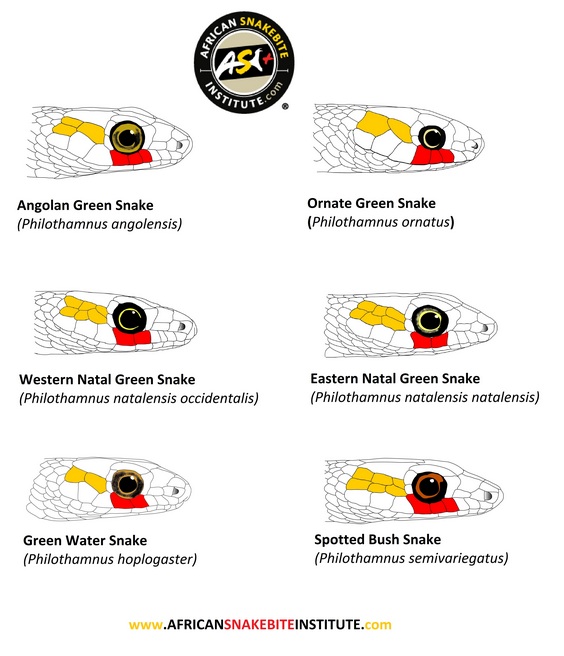 Dichotomous key to the identification of southern African Philothamnus

Does the snake have:

5b. Reddish-brown stripe running down the body…..…Philothamnus ornatus