The cobras of Southern Africa

There are around thirty species of cobra in the world, with an additional three subspecies and three extinct species. They are found from south-east Asia through the Arab region into Africa. Ironically, the King Cobra is not a true cobra and is in its own genus Opiophagus – meaning “snake –eater”. The true cobras all fall under the genus Naja. Naja is a Sanskrit word for snake.

In Southern Africa there are seven cobra species, plus one subspecies. These snakes are all are well adapted and occur in thick coastal forest in the east, into bushveld and throughout the dry regions of the west. In Southern Africa cobras are mostly absent from high altitude mountainous regions. However, we will include the Rinkhals in this newsletter (even though it is not a true cobra) which does thrive in high altitude grasslands.

Our Southern Africa cobras are large snakes, ranging from 1.5 meters to 2.7 meters, the largest species being the Forest Cobra (Naja subfulva). Cobras have smooth scales, which are shiny in some species such as the Spitting Cobras and Forest Cobra but duller in the Snouted Cobra. All Cobras lay elongate eggs, which measure up to 6 cm in length. The egg clutches vary from 8 to 33 eggs and are laid in mid-summer, usually in hollows of trees, under rocks or in underground burrows. The young hatch after about three months and measure around 30 cm. Hatchling cobras are venomous from birth and those from spitting species can spit straight away.

Not all cobras can spit or eject their venom and only four of the eight southern African species can spit. This is a defensive technique used to temporarily blind an attacker so that the snake can escape without getting harmed. The first aid procedure for venom in the eyes requires you to flush all excess venom from your eyes, with any bland or neutral liquid. Water is the best option, but milk, beer or cold drink would suffice if water isn’t available. You want to rinse the eyes for about 15 – 20 minutes to flush away excess venom. A gently running tap is best for this procedure. The same technique must be used for pets that get venom in the eyes. The discomfort lasts for about two days and then subsides. Getting antibacterial cream and a slit-eye examination from a medical professional is advisable. Venom in the mouth or on the skin is not harmful and can be washed off. 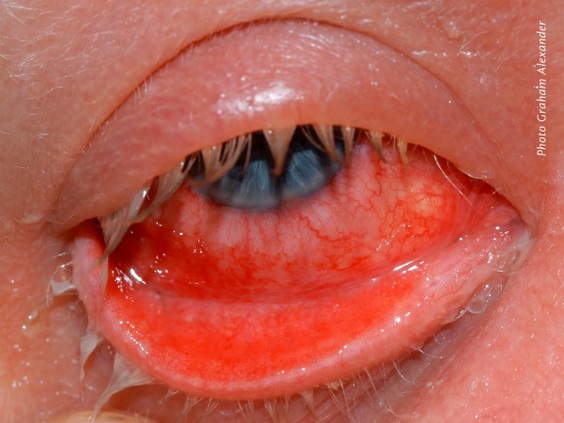 Spitting Cobras are equally comfortable at biting and if the attacker does not move away after being spat at, the snake will be quick to bite. Because cobras are good at warning people off with their large hoods and defensive displays, we do not see many bites. The exceptions are the Mozambique Spitting Cobra (Naja mossambica) and the Zebra Cobra (Naja nigricincta nicgricincta). These two spitting cobras are ferocious feeders and have the unfortunate habit of entering houses at night whilst hunting. When they come across a sleeping mammal (a human) they often mistake the person for a meal and give a solid bite and many people are bitten whilst asleep in their beds including children and even babies. These bites happen in summer and we have ample evidence that it is not a matter of the snakes seeking heat or accidentally being rolled over onto – the bites are clearly feeding response bites and unlike defensive bites invariably result in severe envenomation.

The Spitting cobras have a predominantly cytotoxic venom, causing swelling, blistering, necrosis and tissue damage. There are few deaths from these snakes, but bites often cause severe tissue damage that may necessitate skin grafts and occasionally amputations. The larger cobras such as the Snouted Cobras (Naja annulifera) and Forest Cobras (Naja subfulva) have a mixture of both neurotoxic and cytotoxic venom that causes swelling and respiratory distress. The Cape Cobra (Naja nivea), our most venomous cobra species, has a predominantly neurotoxic venom similar to that of the Black Mamba – and accounts for around six deaths a year in Southern Africa.

Description – a large cobra of around 1.4 meters, reaching a maximum of 2.3 meters. Colours range from bright yellow, golden brown, sandy brown to dark brown and almost black often with a dirty speckled appearance. Juveniles are usually light yellow with a dark band on the throat region that fades with age. A nice characteristic is a black tail tip that is seen in most individuals.

Distribution – found on the western side of southern Africa, from Cape Town along the west coast to north of Windhoek, Namibia, and inland to central Botswana, south into the north-west province, Northern Cape, Free State and Eastern Cape as far east as East London and the western edge of Lesotho.

Description – the largest African Cobra, reaching 2.7 meters in length, but averaging around 2 meters. These partly arboreal (tree-living) cobras are easily recognised with a pitch-black shiny tail blending into a light yellow front half. There are often a series of black stripes under the eye. The throat region may have a pale dark band with a series of small black dots.

Distribution – recently split into five separate species across Africa. The southern African species occurs north from South Africa’s east coast into Mozambique, the Zimbabwean Eastern Highlands and all the way to Kenya and west into Angola and the DRC.

Venom – both neurotoxic and cytotoxic and may be delivered in large quantities due to the size of the snake. In recent bites in Southern Africa most victims experienced pain, swelling and tissue damage but at least one recent victim had difficulty with breathing and had to be ventilated. Luckily this snake is very shy and bites in southern Africa are very rare.

Description – a large cobra of around 1.6 meters reaching lengths of 2.5 meters. In captivity, some individuals have exceeded 3 meters! The Snouted Cobra is usually sandy brown often with a darker slate grey top. There is also a banded variety that have sections of black and white bands down the back. The throat usually has pale darker bands. These bands are more prominent in juveniles. There is often a darker “tear” mark under the eye.

Venom – The venom is both neurotoxic and cytotoxic, but more often with some swelling and blistering. Even though this is a common species within its range, bites are not common.

Description – a large cobra of around 1.5 meters reaching lengths of 2.5 meters. The Anchieta’s Cobra is superficially similar to the Snouted Cobra. It has a lower midbody scale count, resulting in lager scales which are obvious on the back of the hood. The Anchieta’s Cobra is usually sandy brown often with a darker slate grey top. There is also a banded variety that have sections of black and white bands down the back. The throat usually has pale darker bands. These bands are more prominent in juveniles.

Distribution – This species is common in central and northern Namibia, extending east into northern Botswana and north-western Zimbabwe.

Venom – The venom is both neurotoxic and cytotoxic, but more often with some swelling and blistering.

Distribution – In the sub region, this species only just enters into northern Namibia in the Caprivi region. Further north it is common throughout sub-Saharan Africa.

Venom – The venom is cytotoxic. This large cobra is quick to spit its venom when confronted and equally quick to bite if given the chance. The venom is predominantly cytotoxic, causing swelling and blistering.

Description – a medium sized cobra of around 1.2 meters that rarely exceeds 1.5 meters in length and with a maximum length of around 1.8 m.Beautifully patterned with fine white to yellow and black bars down the back. The throat region is pitch-black and the chin is often pale. The head is usually black, but may be brown in colour.

Distribution – Found from central Namibia north into Angola. This snake is common around human settlements where it hunts amphibians and rodents.

Venom – a cytotoxic venom, causing pain, blistering and swelling. This species is quick to spit its venom but will not hesitate to bite. It unfortunately bites a number of people in their sleep after mistaking them for food.

Description – A large cobra of around 1.2 to 1.5 meters that may reach 2 meters in length. It is a jet-black snake with a shiny gun-metal grey chest. This is a subspecies of the Zebra Cobra.

Distribution – This snake occurs from just north of Cape Town, into the Cederberg and through Namaqualand and as far inland as Upington and Kathu, then into Namibia as far north as Windhoek. It is fond of rocky hills and dry river beds.

Venom – a cytotoxic venom that causes blistering and swelling. This snake is quick to spit and bite, but prefers to escape into rock cracks or bushes. Bites are rare as it a shy snake that is not frequently seen.

Description – a medium sized cobra of around 1.2 meters, but attains a maximum length of 1.8 meters. It is probably the most common cobra species within our range. It is generally brown to grey in colour with black-edged scales, creating a fish-net appearance. The belly is light salmon pink to almost orange with a series of well-defined bars on the throat. These are shiny snakes.

Distribution – Found from the Transkei, north through KZN, eSwateni, much of Mozambique, all of Zimbabwe and into northern Botswana and Namibia. It prefers rocky regions in bushveld habitat, but is equally at home in urban areas where it feasts on toads.
Venom – a cytotoxic venom, causing blistering and tissue damage. This snake accounts for the most bites in southern Africa and has the nasty habit of entering houses and biting people whilst they sleep. When confronted, it is quick to spit its venom.

Although not a true cobra, we are including Rinkhals in the post, because people often confuse them with cobras.

Description – this is not a true cobra, but has similar attributes. It differs from true cobras as it gives birth to live young (cobras lay eggs) and has keeled scales (cobras have smooth scales) as well as some other anatomical differences. In Gauteng and Mpumalanga they are mostly grey to black with white cross bars on the throat. In the Natal midlands down to the Western Cape, Rinkhals are banded with yellow and black bars much like the zebra cobra.

Distribution – this species is restricted to southern Africa, found in grasslands and fynbos of South Africa, Lesotho and eSwateni and a small population in the Eastern Highlands of Zimbabwe. It does not occur in any of the other neighbouring countries.

Venom – a mix of both cytotoxic and neurotoxic venom that causes tissue damage but rarely respiratory distress. This species is quick to spit its venom and many dogs are spat at. Bites are not common which is lucky as this species is common around urban areas.