How to identify a potentially dangerous scorpion

There are around one hundred and fifty scorpion species in Southern Africa, some still undescribed. That makes identifying them a bit daunting. However, there is a great rule-of-thumb when it comes to scorpions: The thicker the tail and smaller the pincers, the more venomous it is.

Scorpions are generally nocturnal hunters that are ferocious feeders of invertebrates such as insects, spiders, centipedes and even other scorpions. The scorpions seize their prey with the pincers. Scorpions with larger pincers use the increased muscle power to crush the prey and kill it before eating it. Scorpions with smaller pincers struggle to crush the prey, so they use the venom in the tail. 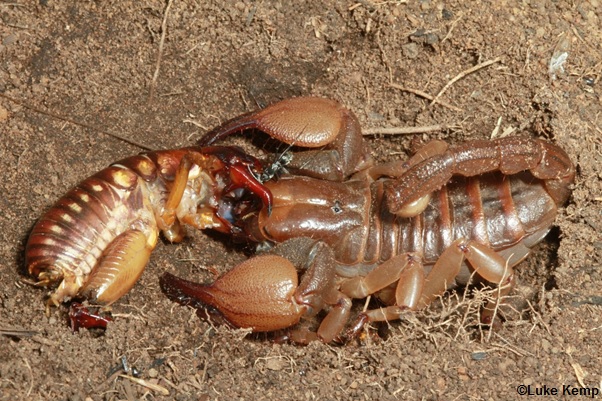 A Rough Burrower (Opistophthalmus glabrifrons) eating a King cricket. This species uses both the large pincers and medium thick tail to kill prey.

The size of a scorpion makes little difference to how dangerous it is. A baby Thicktail Scorpion of a few centimetres will deliver a painful and potentially dangerous sting compared to the mild prick delivered from a large (up to 20 cm) Rock Scorpion.

There is no rule of thumb for determining whether a scorpion is dangerous based on colour alone. Highly venomous scorpions come in a whole range of colours, from black, brown, yellow, light brown, orange and a mixture of all of the above. 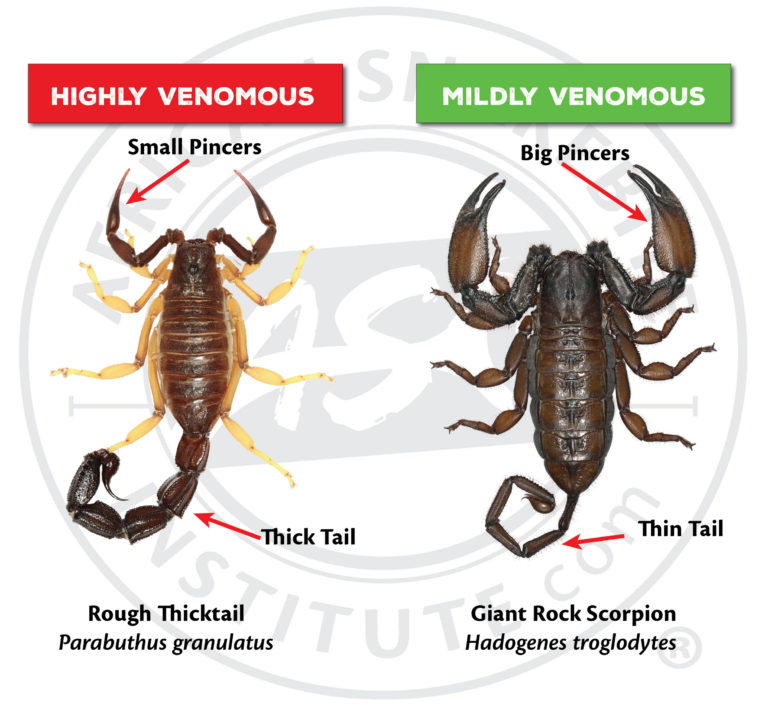 The rule of pincer size to tail size is the best way to tell how dangerous a scorpion is. 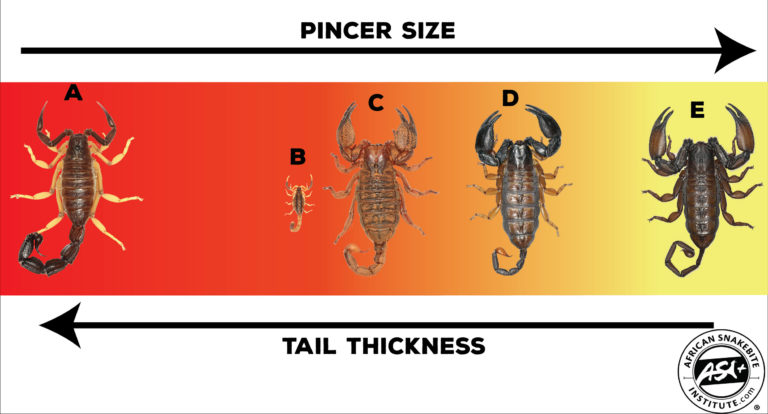 The genus Parabuthus (A) contains our deadly scorpions in South Africa. There are three species that are potentially life threatening and the other species will ruin your week. Note the ratio of small pincers to thick tail in Parabuthus.

The genus Uroplectes (B) are known as Lesser-thicktails. These are generally small scorpions of a couple of centimetres in length. They too have thick tails and small pincers and a sting from one of these is very painful, although not life-threatening.

The Burrowers (C and D) are made up of two genera: Opistophthalmus (C) and Opisthacanthus (D). Both genera have large pincers and medium to small tails. These scorpions pack a sting that is around a wasp or bee sting. They can also pinch or nip pretty hard with those large pincers!

Lastly, we get the Rock Scorpions (E) in the genus Hadogenes. These large scorpions, often exceeding 20 cm in length, are gentle giants and the sting is barely noticeable. It is comparable to the thorns of an Acacia tree, where there is a slight tingling feeling and then becomes itchy. If the scorpion is upset however, those pincers give a good nip. 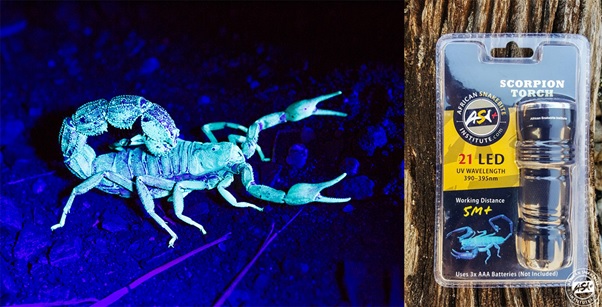 Scorpion torches are a great way to search for scorpions if you are interested. The scorpions fluoresce under Ultraviolet light and make finding them easy. You can practice your scorpion ID skills using the ASI Snakes App

We also have posts on the scorpions in each province, you can find them here: