Preserving the specimen is tricky and complicated process and should only be undertaken if you are confident in the process.  Anyone keen on learning the essential basics can contact one of the listed museums and a short demonstration of the fixation and specimen setting process will be conducted, as well as supplies of some basic field preservatives, DNA tissue solution, proper tags, etc.

Basic equipment needed is the following:

Warnings: Formalin is known to cause cancer and it is important to minimize exposure to these chemicals when using them. Always work in an open space and wear gloves. The use of syringes with needles is another hazard associated with this protocol. Syringes are used to inject specimens with formalin (a carcinogen). Handle syringes carefully. Feel free to place the specimen being fixed in a tray to inject it instead of holding it in your other hand to minimize the risk of sticking yourself with the needle. If stuck by a needle, rinse with cold water for 15 minutes and wash area with soap and water. The final hazard associated with fixation and preservation process is the specimens themselves. Since these are dead animals, they may carry zoonoses and parasites. To minimize the hazard of being exposed to these pathogens, always handle specimens with gloves.

Prior to preserving the specimen, first collect the tissue sample. It should be emphasised that all instruments (scalpel, scissors, forceps) used for collecting tissue samples must be both thoroughly cleaned and sterilised with 70% alcohol (ethanol) before and after taking each sample, and that neither the working surfaces of the instruments nor the tissue being collected must be touched by the worker’s hands. To avoid contamination, putting labels inside the specimen container, while theoretically desirable as a safeguard against loss of data, carries a high risk of contamination and is therefore not recommended. The volume of fixative should be large, at least 20 times the volume of the specimen. The samples must be protected from light at all times and well labelled. 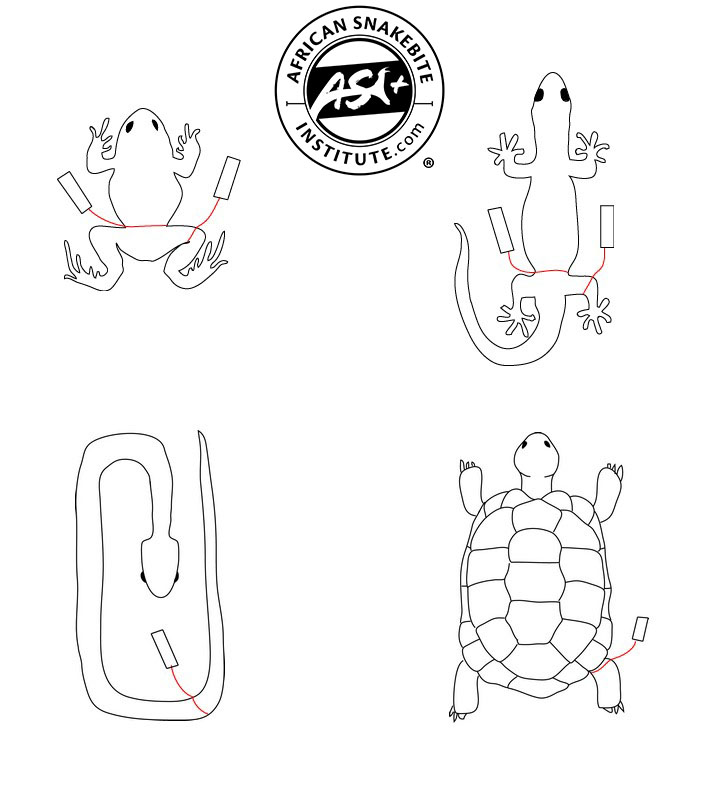 Note the position of the labels on each group. Frogs and geckos/lizards is optional between the two places often with smaller specimens labelled around the waste and larger specimens on the leg.

Check with your local museum whether their permit covers them receiving such specimens or allows for field collaborators to collect dead specimens on their behalf. Please note, that most provinces require permits, even for the collecting and transporting dead specimens. Museums or their officials will not legally place their institutions at risk if the collector fails to adhere to the relevant conservation legislations.  It should also be noted that if the specimen data is used in a research publication, the journal often requires proof that the specimen was legally collected (i.e. a permit valid for the period and locality from where the specimen was obtained). Failure to take this into consideration may result in the loss of valuable information to the scientific committee.