Everything you need to know about antivenom 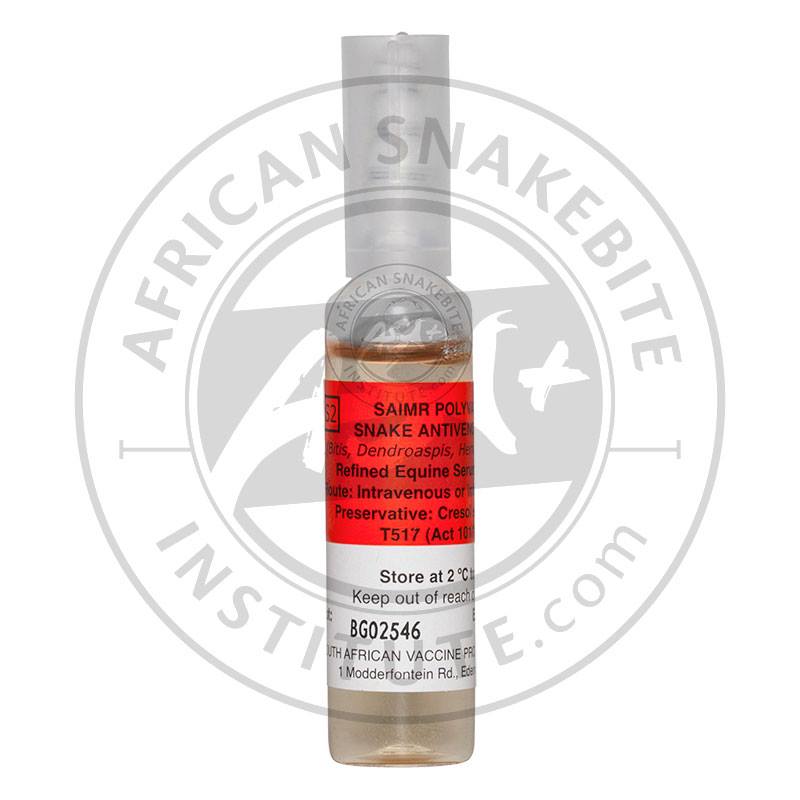 The only effective treatment for severe snakebite envenomation from a potentially deadly snake is antivenom. Using antivenom is not easy and, like most drugs, it has its disadvantages but in the right hands, and at the right time, it can be life-saving.

Yet people often have a poor understanding of how it works and there are endless myths about antivenom killing more people than the snake venom itself. Not to mention numerous myths of “miracle cures” including antihistamine, cortisone and Vitamin C.

History of antivenom in Southern Africa:

Antivenom for snakebite was first developed back in 1886 and local production started in Pietermaritzburg in 1901, but in small quantities with most of the antivenom still being imported from the Pasteur Institute in Paris, France. In those days one could purchase a 10 ml vial of cobra or mamba antivenom from Mr. F.W. FitzSimons, Director of Port Elizabeth Museum.

In 1928 the South African Institute for Medical Research (SAIMR) started producing antivenom which was initially limited neutralising only the venom of the Cape Cobra and Puff Adder, but Gaboon Adder venom was included into the manufacturing process in 1938. Around this time the first monovalent Boomslang antivenom was also developed.

Rinkhals venom was then added followed by the production of different mamba antivenoms in the 50’s and 60’s and in 1971 the venom of the Forest Cobra, Mozambique Spitting Cobra and Snouted Cobra was included to produce a polyvalent antivenom that is still manufactured today.

Antivenom is raised in a variety of animals including sheep, donkeys and camels but in South Africa we use horses. The South African Vaccine Producers make antivenom by hyper immunising horses, a process that takes around nine months during which small quantities of snake venom are injected into horses, not enough to do harm the horse, but enough to trigger its immune systems. The amount of venom injected is gradually increased as the horse becomes more resistant to the venom. Snake venom is sourced from individuals and companies locally and elsewhere in Africa. Once immune, blood is drawn from the horse at two month intervals and the serum is removed from the blood, the latter is returned to the horse and the serum purified. It is bottled in 10 ml vials in liquid form. 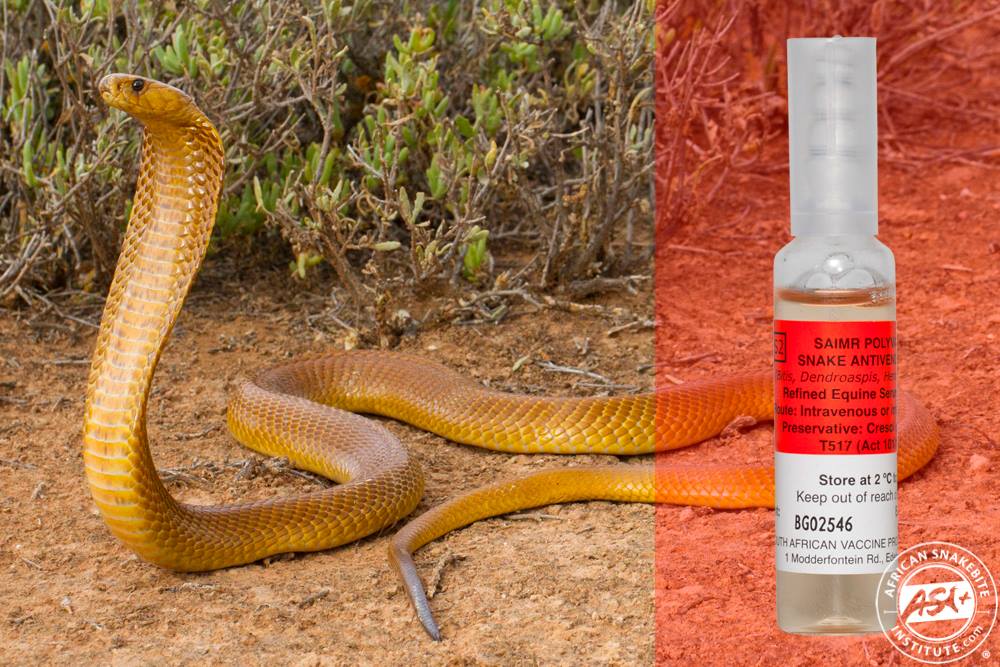 Only venom from the Boomslang (Dispholidus typus) is used in the production of a Monovalent antivenom and a separate antivenom is made for the Saw-scaled Vipers of the genus Echis in North Africa. 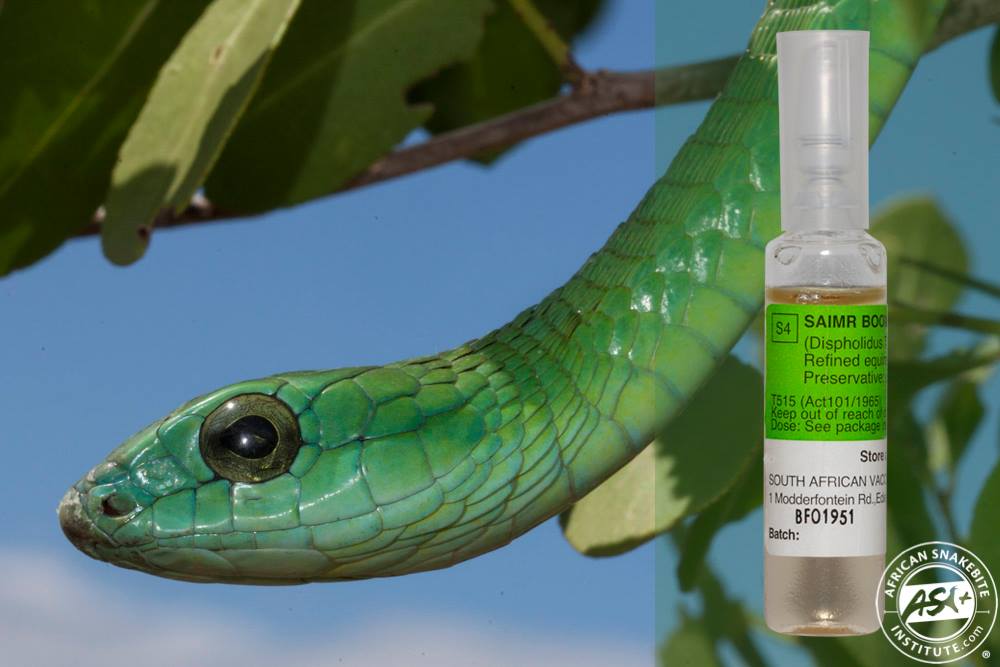 How it is used:

Few snakebite victims are treated with antivenom (less than 20 % of those hospitalised after a snakebite) as most victims are not severely envenomated or the bite may be from a snake that is not considered potentially deadly or is not covered by the antivenom (Rhombic Night Adder, Berg Adder and Stiletto Snake). Antivenom is relatively scarce, expensive and can have disastrous side-effects. The biggest danger is an acute allergic reaction (anaphylaxis) or, to a lesser degree, serum sickness that can affect the immune system several days after treatment.

Snakebite victims are not automatically injected with antivenom as most of them never experience symptoms severe enough to justify its use. The majority of snakes have control over their venom glands and are quite reluctant to waste their venom on humans. They very often give ‘dry’ bites with no subsequent symptoms of envenomation or the snake might inject a little bit of venom that will cause discomfort or some symptoms but nothing serious. Such patients are usually hospitalised for a day, carefully monitored and then sent home.

Antivenom should only be used in a hospital environment and when absolutely necessary. Patients will already be on a drip and the antivenom is always administered intravenously although intraosseous administration may be a consideration if veins prove difficult to find. Most doctors will start with an initial dosage of 8 – 10 vials (Polyvalent antivenom) and in a recent severe mamba bite the victim received 40 vials before recovering. As already mentioned, some snakebite victims quickly have an allergic reaction to antivenom and this happens in more than 40% of all cases where antivenom is used. Some of those victims go into anaphylactic shock which is a life-threatening medical condition and must be treated with adrenaline. This has to do with the fact that our antivenom is made from horse blood and the allergy is basically an allergy to horse proteins.  Additional processes in the manufacturing of the polyvalent antivenom could also reduce the incidences of anaphylaxis.

If a pregnant woman is bitten by a venomous snake, can she be treated with antivenom and will it adversely affect the foetus? I discussed this with Dr. Gerbus Muller of the Tygerberg Poison Centre and my good friend Dr. Colin Tilbury, one of the most experienced snakebite doctors in Africa. In any serious snakebite, antivenom is administered to save life or limb. Other than the well-known potential side effects of antivenom, it has no adverse effect on a healthy foetus. Withholding antivenom in such an emergency could lead to the loss of life for both the mother and the foetus.

Cats rarely get bitten by snakes, but dogs (being natural hunters) just cannot help themselves when they see a snake and invariably try to kill the snake. While some dogs are quite efficient at killing snakes, however they usually end up getting bitten.

In cases of severe envenomation, pets and farm animals need antivenom and should be taken to a vet immediately. Giving a bitten animal Allergex tablets, milk, charcoal or any other tablet is of absolutely no use.

In most snakebites from potentially deadly species a dog will be injected with 2 – 4 vials of Polyvalent antivenom or 2 vials of Monovalent antivenom if bitten by a Boomslang. In mamba or Cape Cobra bites even more antivenom may be required and the sooner it is administered, the better. Such a treatment could cost anything from R4,000 – R20,000.

Polyvalent antivenom costs R2100.00 per vial (10ml) and although it can be purchased without a script it should only be administered by a medical doctor in a hospital environment or if it is an animal by a vet. It can purchased directly from the manufacturers – the South African Vaccine Producers.

Monovalent Boomslang Antivenom costs R6900.00 per vial (10 ml) and is Schedule 4 – a script from a doctor is required to purchase it.

We are often asked which hospitals carry antivenom. There is no register of hospitals that do as a hospital can purchase antivenom today, use it tomorrow and not replace it. Hospitals in high risk snakebite areas tend to keep antivenom and those in low risk areas seldom do. Several hospitals also keep far too little antivenom for a single treatment. Bear in mind that snakebite deaths, in the short term, are largely because venom effects breathing and for that reason it is important to get the patient to the nearest hospital where he or she can be ventilated. Once stabilised they can establish whether they have antivenom or if the patient needs to be transferred to another centre. The disadvantage with cytotoxic bites (like Mozambique Spitting Cobra or Puff Adder bites) is that the longer it takes to administer antivenom, the more severe the subsequent tissue damage.

Each vial of antivenom must be refrigerated and will expire after 3 years.

Why is there no antivenom for certain snakes?

The development of antivenom is extremely expensive and takes many years as each new antivenom needs to be subjected to clinical trials. For that reason we only have antivenom for those snakes that have caused fatalities in the past. A number of snakes have rather potent venoms that cause a great deal of damage and have the potential of resulting in fatal bite but are not covered by antivenom. This includes the likes of the Twig Snake (Thelotornis capensis capensis), the Berg Adder (Bitis Atropos), the Rhombic Night Adder (Causus rhombeatus) and Bibron’s Stiletto Snake (Atractaspis bibronii).

Patients that are bitten by any of these snakes often need to be hospitalised where doctors will treat symptoms.