What is the deadliest snake in Southern Africa?

What is the deadliest snake in Southern Africa?

A popular question with no easy answer. We do not have a way to test snake venoms on humans, and in the past, tests were done on laboratory mice and referred to as a LD50 test. It boils down to the amount of venom, measured in milligrams, that is required to kill fifty out of one hundred laboratory mice within 24 hours.

There are several problems with LD50 tests – firstly it is done on laboratory mice and the same test on wild rodents or birds would probably produce very different results. This is partially because many snakes have prey-specific venom and while the effect of Black-headed Centipede-eater (Aparallactus capensis) venom on mice might be negligible, it is highly effective on centipedes. The same when it comes to humans – some venoms may appear to be highly effective at killing mice but may not have much effect on humans. Another problem with the LD50 tests is the large margin of error. Get three different facilities to do the same tests and the results may differ substantially.

Black-headed Centipede-eater venom is deadly against centipedes but has little to no effect on humans.

If we looked at venom potency in LD50 tests, and compared drop for drop, the Boomslang (Dispholidus typus) comes out tops and can be considered the most venomous snake in southern Africa. Its venom yield is around 8 mg (Black Mambas yield around 300 mg) and the amount of Boomslang venom needed to kill an adult human is around 0,07 mg (Black Mambas need about 15 mg). Despite the Boomslang having such a potent venom, it is a docile snake that rarely bites and as few as two to three bites on humans are recorded most years in southern Africa. It is a tree-living snake, is not easily stepped on and is very quick to go deeper into trees and shrubs when disturbed. Boomslang venom is also very slow in acting and it usually takes anything from five to thirty hours before bite victims show the first symptoms of envenomation – blood oozing from the bite site or bleeding from the nose accompanied by a headache. So, although the Boomslang has the most potent venom (drop for drop) it is certainly not a very dangerous snake as it rarely bites, and fatal bites are extremely rare.

The Puff Adder (Bitis arietans arietans) is often considered the deadliest snake in southern Africa and Africa and does account for a large number of bites every year – mostly when people accidentally stand on Puff Adders at night. The venom of this snake is quite slow in acting and is cytotoxic, causing pain, swelling, and blisters that may result in tissue damage. Fatal bites are quite rare as victims have ample time to get to a hospital. 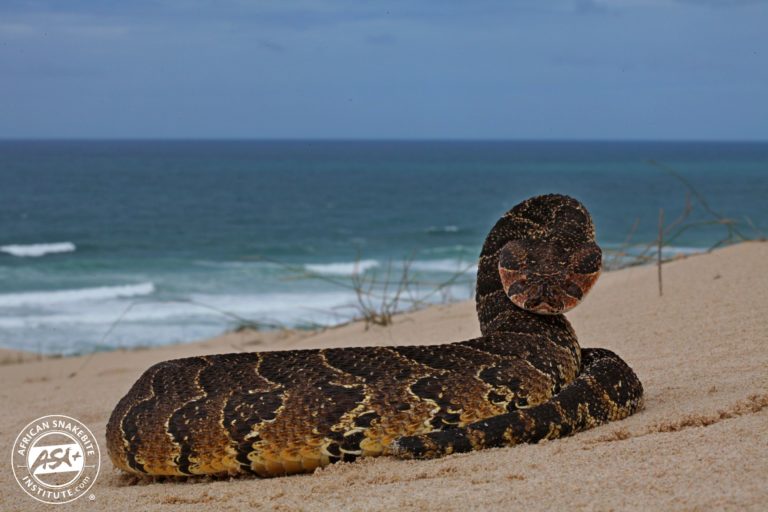 The Mozambique Spitting Cobra (Naja mossambica) accounts for many serious snakebites every year and has the bad habit of entering houses and biting people in the face or on the chest and arms while they are asleep. It is not a case of the snake seeking heat or accidentally biting when victims roll onto them in their sleep – these snakes are ending up in houses, entering through windows, open sliding doors or going under doors (if the gap is big enough to push your finger through, a cobra can easily enter) and finding a sleeping mammal which the snake then bites as though it is a meal. This is a major problem, both where people sleep on floors and in luxury game lodges where many high-paying guests have been bitten. This behaviour has also been recorded in the Zebra Cobra (Naja n. nigricincta) in Namibia. Like Puff Adder venom, Mozambique Spitting Cobra venom is cytotoxic and slow in acting, rarely killing victims, but causing a great deal of tissue damage. 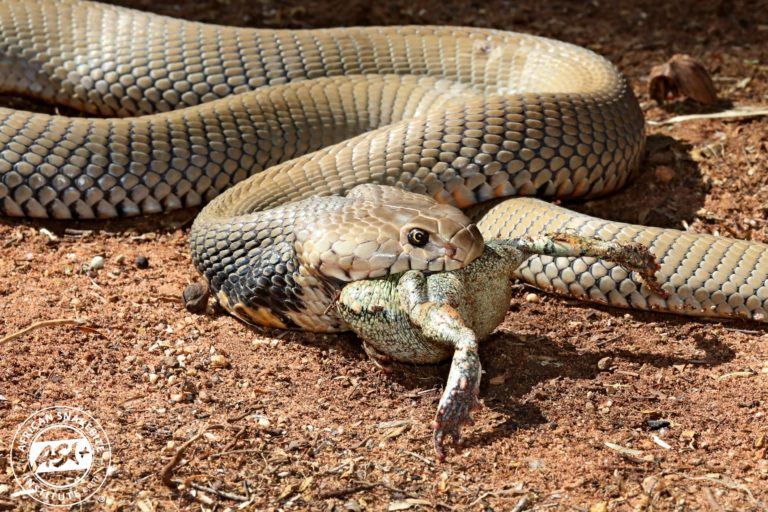 Mozambique Spitting Cobras are ferocious feeders and often end up in houses whilst on the hunt.

Bibron’s Stiletto Snake (Atractaspis bibronii) also accounts for a large number of painful bites every year, but no fatalities. It is an unusual snake that lives underground and surfaces at night, especially after heavy rains when it is often stood on. It is often mistaken for a harmless snake and picked up, often behind the head, and this invariably leads to a painful bite. This snake has large, hinged fangs that can protrude out of the side of the mouth even when it is closed and cannot be held safely in any manner – if you handle one you will get bitten. Its venom is also cytotoxic, causing severe pain and blistering and many victims lose a digit or two. 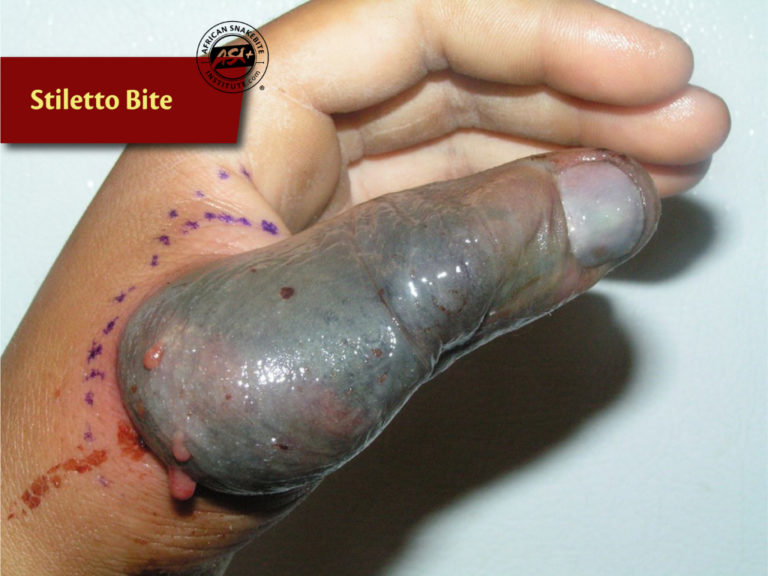 Severe envenomation from a Stiletto Snake often leads to tissue damage and necrosis and may lead to the amputation of the digit. Photo by Myke Clarkson.

We very rarely see bites from the larger non-spitting cobras such as the Snouted Cobra (Naja annulifera) and Forest Cobra (Naja subfulva). These cobras usually avoid people and are quick to make a hood to frighten off attackers. The same applies to the Rinkhals  (Hemachatus haemachatus). Although many bites to dogs are recorded from these snakes, bites to humans are few and far between. These three snakes appear to have a mix of neurotoxins and cytotoxins and we often see some difficulty with breathing as well as swelling. Similar reactions are recorded in the Green Mamba (Dendroaspis angusticeps) with significant swelling after a bite. Deaths from these snakes, provided medical attention is given, are almost never heard of. 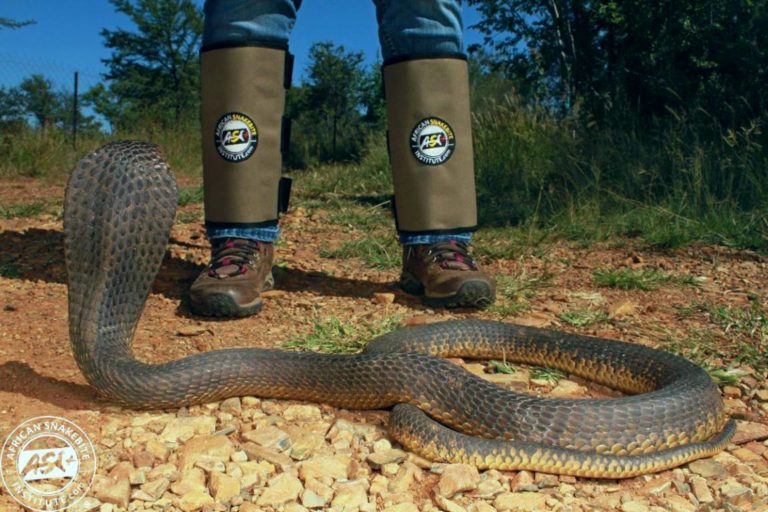 Many of the cobras in southern Africa will spread a large hood as a warning and bites from these snakes are not common.

Our two deadliest snakes are the Black Mamba (Dendroaspis polylepis) and the Cape Cobra (Naja nivea), and they account for most of our snakebite fatalities every year. In South Africa we have around ten to twelve snakebite deaths a year. Both these snakes possess a predominantly neurotoxic venom that causes progressive weakness that soon affects breathing and in serious bites, especially in children, a bite could be fatal within half an hour. Victims need to be hospitalised urgently where they can be ventilated if required, prior to antivenom being administered. 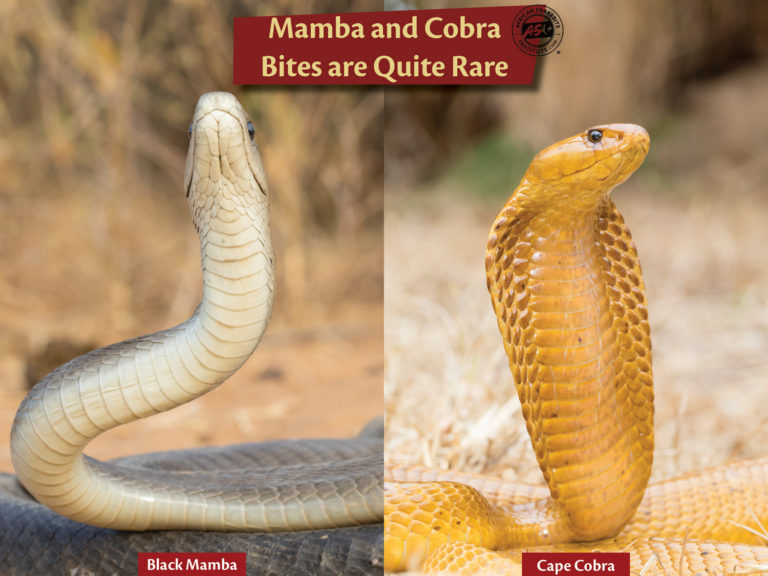 Black Mambas and Cape Cobras account for few bites a year but fatalities from the bites are not uncommon.